Next October it will be one year since Windows 8 was released. By now, a lot has been written about the latest version of Microsoft’s operating system, receiving a fair deal of praises and criticism alike. Today we are going to approach the matter from the outlook of a professional translator. Without going into too much detail, we will try to summarise the most important changes, give some basic advice on its use with translation and project management tasks and clarify some questions.

Windows 8, which in a few weeks will receive the 8.1 update with important new features, brings a radical change in comparison with its predecessor. And therefore, raises many questions in our mind: What has changed? Will there be any compatibility issues? Will it make any difference when translating or managing projects? Will the learning curve be steep?

Let us try and answer some of these questions.

The biggest change of all in Windows 8 is, no doubt, the introduction of the Metro interface as Start screen. After rapid boot sequence, a lot faster than usual particularly in computers with SSD units, we will come across a screen that looks very much as the one below.

This is the Start screen, where both the apps that run on the Metro UI (with tiles that offer real time information), as well as shortcuts to good old Desktop applications can be found. The Desktop itself is shown in this screen as another tile. You must click on it to view it full screen.

The Desktop is very similar to the one we are used to in Windows 7. Maybe with a more refined design, leaving out those transparencies of the Aero interface. This will be our workplace. There are few new features here, mainly performance updates. There are no apparent changes but… wait a second… the Start button is nowhere to be seen. 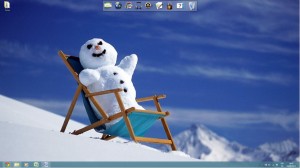 In this edition, the Start button has been replaced with the Start screen. Accessing the Start screen is as easy as hitting the Win key on your keyboard or hovering your mouse cursor over the bottom left-hand side corner of the screen.

Accessing programs with the search engine

Accessing different programs is a lot easier than it looks like. This is, in fact, one of my favourite features, as we can do it with just two or three keystrokes.

Instead of browsing through the folders in the Start menu or looking for the shortcut at hand, we use the powerful search engine in Windows 8.

We just need to press the Win key and start typing the program name…. instantly a list with the matching applications will appear on screen as we type. Then we press Enter to open the application and that’s it. We can also use this engine to search for files in the system or within any application.

The Start menu in Windows also had a search engine, true, but in this new release the engine has been outstandingly enhanced and works a lot more smoothly.

It is very common for a translator or project manager to have many applications open at the same time. Actually, one of the things I like more about Windows 8 is the way it handles multitasking.

The transition between Metro apps and Desktop applications is very quick and smooth if we use the combinations Alt+Tab to move between applications, both Metro and Desktop, or Win+Tab if we want to show a left-hand side menu to switch between Metro apps. With the latter, the Desktop is considered just another app altogether. Another way to access this menu is hovering the mouse cursor over the top left-hand side corner of any screen.

With Alt+F4 we can close any app, be it Metro or Desktop. 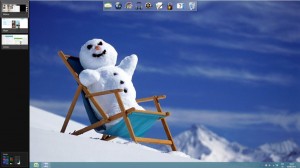 Although we may think that the Metro UI and the Desktop are separate environments, in reality they fit in quite seamlessly.

In my daily routine sometimes I do have about 10 applications open at the same time as I work: Outlook, Word, the CAT tools of the moment (usually several of them), dictionaries, Internet browser, QA tools such as Xbench, virtual machines and even the Music Metro app, to name a few, and the transition is just as smooth.

Are there any compatibility issues?

Any application that runs in Windows 7 it is also compatible with Windows 8, since both systems are based on the same architecture. I still have not come across a CAT tool that would not run normally on Windows 8: Translation Workspace, Idiom, SDL TRADOS 2007, SDL Studio 2009 & 2011, Wordfast, Passolo, etc.

In my case, the only application I had to update was TotalCommander. However, I could have just kept using the same old version in XP compatibility mode (just as with Windows 7).

Are there any Metro apps that can make a difference in translation?

Some Metro UI apps can actually make life easier for us when translating. For instance, the RAE y PONS dictionary apps, both of them free of charge, do enhance the web searches in both sites and speed up the querying process, which at the end of the day is what we want.

From a more complementary point of view, I do love the Music app, which offers unlimited music streaming for free. Something that comes in very handy while we spend hours working in our computer.

Conclusion… Is the learning curve steep?

Being interested in all kind of new technologies, updates always catch my eye. I love “playing” with them. After quite a while using Windows 8, I must say that I find it much better than Windows 7, since it is quicker and more stable, handles multitasking a lot better and optimizes RAM usage.

Actually, when I have to use Windows 7 at the office, I sometimes find myself missing some of the features in Windows 8.

To any translators considering an upgrade to their PCs, I would certainly recommend them a Windows 8 computer, since adaptation is quite fast and there are practically no compatibility issues. I know computer illiterates that have learnt to use it in a couple of days.

Besides, if you work from home, you can use the Metro UI for your personal apps and shortcuts and the Desktop for any work-related programs. This invisible barrier is something I do like.

Before I go, let me leave you with a link with more Windows 8 shortcuts to improve productivity:

Sin respuestas a "Windows 8 for translators"

An introduction to medical translation